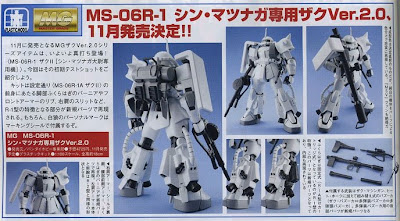 I really like the design of the Zaku. I guess the gundam universe wouldn't be complete without the Zaku. An MG Zaku is on my To Buy List, probably the red version 2.0

But I'm kinda wondering if all these Zaku variations did come out in the classic anime, or in some manga series. There are so many, like the black and purple Trinity version, then the recently released Jhonny Ridden custom. Is this the money milking scheme of Bandai that other bloggers are talking about? Is it really necessary to release each and every Zaku variation with a different gun, backpack, color scheme, etc as an MG kit? I think that there are so many other MS designs that can be released as a plastic model kit.

The first gundam series I fell in love with was Gundam Wing. There are so many good MS designs there and I would really like some of them to be released as an MG. One for example is the Mobile Aries

It looks like a jet, and I remember that Ms. Raine/Rein (whatever) piloted one of these. Another MS I really really liked from the series is the Mobile Doll Virgo

The red disks on its shoulder launches to gives out some sort of protective energy shield. If I remember it right, Virgo doesn't need pilots because they are remote-controlled by that other girl character who has the splitted eyebrows. And that beam rifle is much bigger from the animation.

I really think it would be cool if Bandai would shift its attention to other MS designs from the other gundam storylines. It wouldn't be bad too if they can release a Mercurius and Vayeate two-in-one pack MG. That tag-team between Trowa and Heero was legendary =)

Images of Aries and Virgo from Gundam Wiki.