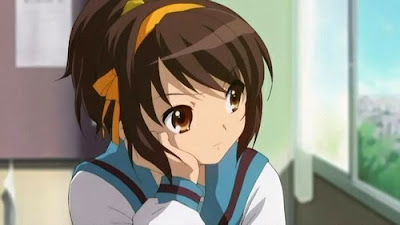 I was watching TV when I saw the trailer of this upcoming independent film here in the Philippines.

I have never watched an independent film before. Based on what other people are saying, Filipino independent films are really good, and are getting better. They are becoming more appealing compared to the films which are produced by the huge film companies because of the unique approach and more "artsy" feel, compared to the commercially produced ones which are intended to earn money just because the actor in it is famous even though the story is unoriginal and downright dumb (whew!). Hollywood movies are still the most popular here, but I did notice that local indie films are getting popular with the general crowd too.

So I was trying to get an idea of what this movie is all about when I noticed someone dancing at the background near the end of the trailer.

Play the clip and look closely at 1:02 to 1:04. I guess the guy who made this film is a huge Haruhi fan as well.
YouTube link: http://www.youtube.com/watch?v=p8E3ZU4SMOM